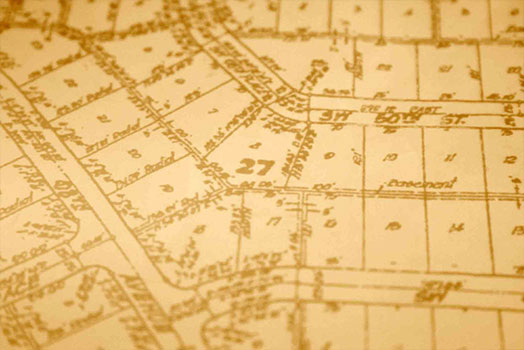 One of the first steps in any boundary survey is to figure out exactly what is being surveyed – that is to say: what boundary or boundaries will we be trying to distill from the collection of documentary and physical evidence that we uncover? The client – often the owner of the property or someone working on their behalf – will usually provide the municipal address of the property and perhaps, if we are lucky, an old survey of the property. In any case, the next step beyond this first point of contact with the client is to purchase the Parcel Register for the property – commonly referred to as “The PIN” (although technically PIN means Property Identification Number).

The Parcel Register is the Province of Ontario’s official ownership document and contains the all-important Property Description. It is a document that is a product of the Province’s automation and conversion process (Click here [ https://www.ontario.ca/land-registration/land-titles-conversion-qualified-ltcq-land-titles-plus-ltplus-client-guide ] for history of this process…) and is, among other things, the authority on what the boundaries of a specific property are – in other words: is the boundary of a property defined by a Lot Line: a line described as being a specific distance offset from a Lot Line, or simply by an area within a given Lot. Property Descriptions come in a variety of formats but generally they fit into one of the following three categories. The property may be described as being:

Unfortunately, despite their status as the authority on what the boundaries of a property are, the Property Description does sometimes contain errors or ambiguities. A misdescription occurs when the Property Description results in a gap in title, an overlap in title, or ambiguity in title. In our experience, it is most common that a misdescription occurs when the property is described according to the third category above. Often this is because a deed of land or other legal instrument purporting to describe a property can be written without the benefit of a land survey that would have likely resolved any ambiguities or revealed gaps or overlaps in title. An important takeaway here is that the misdescription is a fault in the description and does not necessarily have anything to do with the location or configuration of the boundaries of a parcel of land. The actual location of a boundary line may be fairly indisputable but the description indicates that on the other side of that indisputable boundary is a gap in title and it is unclear if you, your neighbour, or some other third party owns that gap.

Sidenote: A misdescription is different than a difference in opinion about where a boundary is located. A misdescription is the result of an error or ambiguity in the actual worded description of a property’s boundary on title. Whereas a difference in opinion about a boundary location is the result of a difference in opinion about evidence believed to define the location of a particular boundary. For example: the descriptions of a property boundary on both neighbouring parcels may clearly indicate and agree that the boundary between those neighbouring parcels is the Lot Line between Lots 7 & 8. However, evidence recovered in the field may disagree about where this Lot Line is located. Perhaps two survey monuments are found that place the Lot Line 0.20m west of the location of an old fence line. It is then up to the surveyor to decide, in their professional opinion, which set of evidence is the best evidence of the Lot Line between Lot 7 & 8. In this case, there is no question of what the boundary is – the Lot Line. The question is where the boundary is – this is where the surveyor’s expertise comes in.

As land surveyors, our role in correction or resolving a misdescription is to clearly illustrate the problem; usually through the production of a survey plan known as a Reference Plan. Typically, on such a Plan, the surveyor will illustrate the parcel(s) and their boundaries, as described in their respective Property Descriptions and based on unambiguous evidence discovered through their survey work. Then, in addition to these parcels, the Reference Plan will also illustrate the area of the gap or overlap that has been discovered. These distinct areas on a Reference Plan are called Parts and will always include dimensions (bearings and distances), supporting documentation notations (deeds and previous surveys), and usually areas.

However, the process of resolving a misdescription does not end here. To correct the description, a real-estate lawyer must then apply to correct or amend the description. Usually, such a correction relies on the Parts illustrated on the Reference Plan, whereby Parts are used to describe the extent of ownership of the various parcels involved.

Whether you are a private property owner simply looking to clarify your understanding of your property boundaries, or a developer looking to build a subdivision, misdescriptions on title can cause major headaches that sometimes must be resolved to continue with your project. A land surveyor is there to help illuminate the problem so that it can be clearly understood by you and the other consultants assisting in your project, and if necessary, prepare the appropriate Plans of Survey to resolve the problem.

This publication is provided as an information service and may include items reported from other sources. We do not warrant its accuracy. This information is not meant as professional opinion or advice.